Like his love of art, Mark’s involvement with Jesus Painter Ministries goes back many years. Even as a child growing up in Miami, FL Mark displayed a gifting for art from a very young age, earning himself a position in a special art program during his school years. For years he and a small group of promising young students were bused to another school for a full day of art instruction every week. In the age before the rise of magnet schools this program offered Mark an opportunity to explore his naturally budding interest in art. This interest became a passion and in high school he worked with his art teacher to create his own course of study.

As the high school years progressed, however, art and education would transform from an outlet to an escape. During his junior and senior year of high school the social and peer environment deteriorated to the point where Mark felt he needed to leave. Fortunately, the Lord intervened in the form of a group of families in his community who labored to help high school students explore college and future career opportunities. These families even paid for Mark and other students to go on college visits and taste what might await them on the other side of graduation.

As God’s plan would have it, Mark ended up meeting our soon-to-be founder, Mike Lewis, during a chance encounter on a college visit to Harding University. In fact, Mark himself was a crucial catalyst for the initial launching of Jesus Painter Ministries only a few short years after his ordained encounter with Mike. But we’ll get to that shortly. On that day in Searcy, Arkansas in 1995, Mark arrived on the Harding University campus with one burning question standing in the way of picturing himself walking the university’s halls. The question: “How in the world will I fit in?” After all, Miami is quite a different place from Searcy, Arkansas. But sure enough, the Lord had a plan for Mark and Mike and his plan was coming to fruition.

As Mark followed his tour guide through the halls of Harding University he noticed an oddly familiar mark on the back of a passing student’s backpack. Recognizing the hieroglyphic symbol as the mark of one of his favorite bands, Mark stopped to ask the student about it. That’s when Mike turned around to meet a visiting high school student named Mark with a matching symbol drawn on his hand. And the rest of their friendship is history.

Mark returned a year later as a student and the two became the best of friends. From their mutual love of artsy music and art to their fun-loving spirits and road trip adventures, Mark and Mike grew to be as close as brothers. They prayed with one another, pursued the fine arts together, and built businesses together. Mark even introduced Mike to a good friend of his named Anne who would one day become Mike’s wife. Through all of this, the two developed a deep friendship with a strong foundation in faith. It was this foundation that caused Mark to share a topic of faith that he had been wrestling with – one that would ultimately prime Mike for his first live painting performance and the subsequent launching of Jesus Painter Ministries.

You can read about this experience in our ministry overview on the “history” page, but the essential issue Mark had been wrestling with centered around his commitment to being used by the Lord as a tool for His plans. Sharing this prayer with Mike produced an inward conviction that would ultimately push Mike to seize the painting opportunity that turned out to be the very first Jesus Painter Ministries performance a few months later.

During the early days of Jesus Painter Ministries in Searcy, Arkansas Mark accompanied Mike on trips from time-to-time, even going so far as taking days off of school to be there for his friend.

Despite his love of art, however, Mark began feeling the call of full-time missionary ministry. This led him to commit to a life of domestic ministry with summers being spent in shorter stints of international missionary work in Latin America, and Honduras, specifically. In the decade following his college graduation, Mark served as a committed missionary and youth pastor living his passion for engaging at-risk youth and sharing the gospel at home.

In 2011, however, Mark realized that despite walking a path different from that of the artist, he still had a love for art. He began to feel a persistent call toward combining both ministry and art, two paths which he had previously considered irreconcilable with the one he was already on.

Now it was Mike’s turn to bring insight and conviction to Mark in the form of a phone call. The call which started out as a friendly catch up would ultimately end up bringing Mark back into the fold of Jesus Painter Ministries. 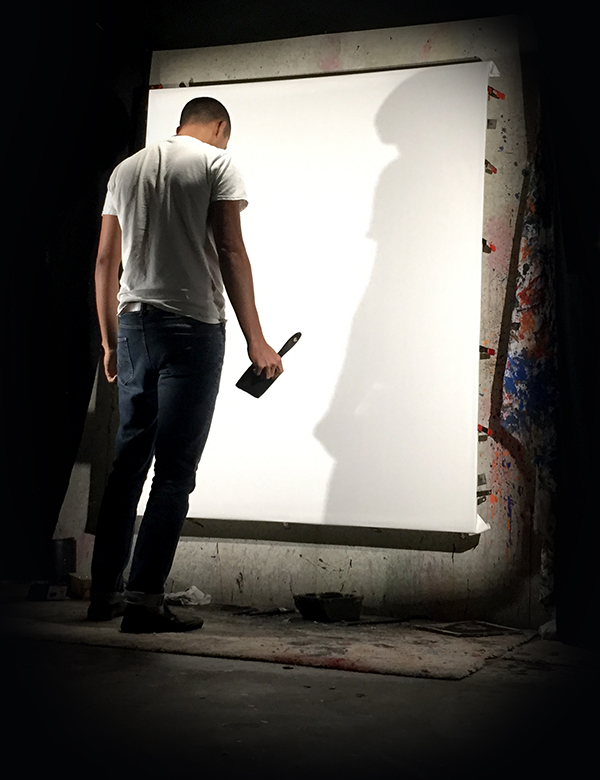